As far as single-panel solar power banks are concerned, the RAVPower Solar Charger is a game-changer. Unlike other solar power banks that would need three to four panels to have a high-capacity battery, this model needs only one.

In making this RAVPower review, we found that it comes in either a 16W or 14W style, so you can choose depending on your outdoor recharging needs and the number of units you plan to bring on your trip.

As far as its solar charging feature is concerned, use it mainly as a back-up or if you’re topping off the battery. This awesome model can charge your regular phone up to seven times! Better make sure it’s in your camping bag the next time you go off the grid!

Quick Navigation
RAVPower Review
Who Is This Product For?
What’s Included?
Overview of the Features
How to Get the Most of the RAVPower Solar Charger
Alternative
Conclusion 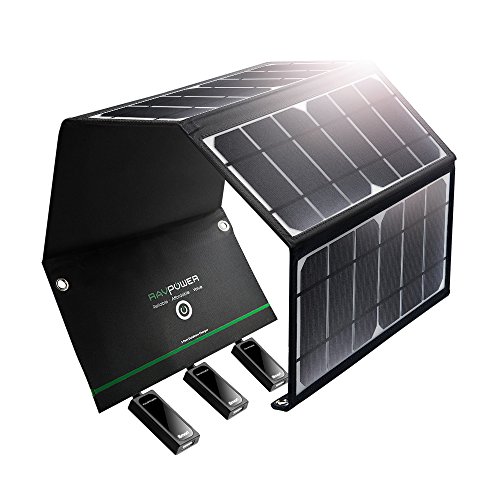 Manufacturers of the RAVPower Solar Charger definitely intended for this device to bring optimal charging off the grid. Whether you’re going on light nature excursions or deeper expeditions into the jungle, you’re going to find this power bank an amazing accessory.

Who Is This Product For?

The best thing about the RAVPower Solar Charger is that it does not limit its benefits to just one particular type of user. From people who suddenly decide to venture beyond the safety of their normal bubble and into the unknown to those who go off the grid regularly, these adventurers are going to find so many useful things about this power bank.

Unlike other models that specialize in either light or lengthy excursions, this particular RAVPower charger can deliver on both these scenarios with ease. Granted, if you were to pick apart its features, you'd notice that its purpose may lean towards the more grueling camping and outdoor adventures. You have this model’s smart design to thank for its incredible versatility.

Whether you’re a seasoned explorer or a newbie just barely making your mark in the outdoor world, you are going to love this power bank.

It doesn’t get more complete than the RAVPower Solar Charger. The device alone is small but is packed full of power to get you through even the longest camping trips. Of course, long camping trips means there’s a chance that this tiny gadget could get lost if it isn’t secured properly. This is when the built-in hanging ring comes into play.

It’s easy to overlook the hanging ring when you take stock of the unit’s other remarkable features, but this durable and high-quality ring is actually what keeps your power bank from getting lost as you navigate the outdoors. On top of that, the ring is also very easy to attach to your pack.

Here’s a look at some of the features that make this product distinct. 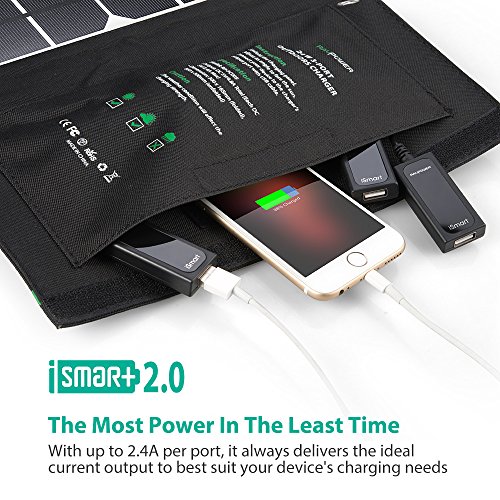 Of course, we can’t forget the fact that this model implements a fast-charging technology, which gets your phones to full battery in literally no time at all. Smartphones that don’t really require that much energy to charge will take even less time to load up.

While it isn’t really that big to begin with, the fact that it’s composed of only one panel makes it a bit larger and bulkier than similar models. The size might be of concern to you because of the fact that this is only a single-panel unit, which means that the battery could be a lot thicker. 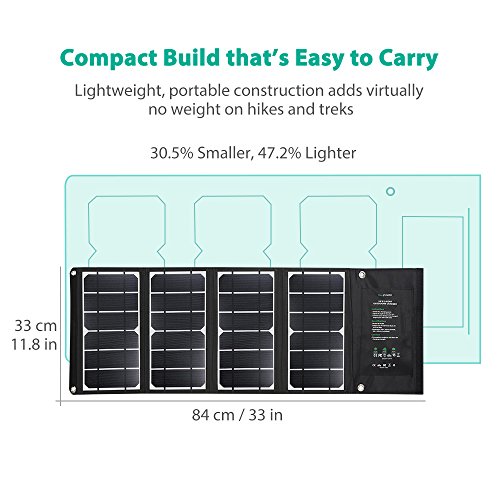 Nevertheless, it is still designed in a way that makes it effortless to carry when you’re out in the wilderness. Among the things we look for in our power banks are their portability and weight, and this unit definitely has these features down pat.

You won’t have to worry about leaving behind some of the technology you deem necessary out in the wilderness just because you might not be able to charge their batteries. That’s going to be a complete non-issue when you have this smart and handy solar power bank. 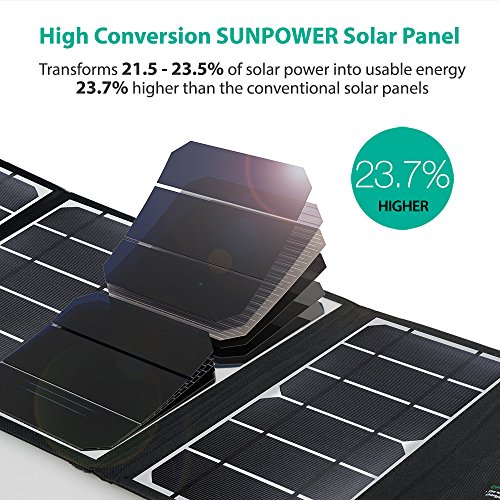 The battery can hold and deliver a ton of power, which makes this model a really, really good one for your outdoor trips. Despite the many great things about the battery, however, it also has a downside. It can be too thick and bulky for some users. If large batteries are a deal-breaker for you, then you may not like this one.

Aside from being able to charge your regular phones up to seven times, this power bank can also load up the batteries of bigger gadgets up to three to four times. How great would this be for your camping trip? 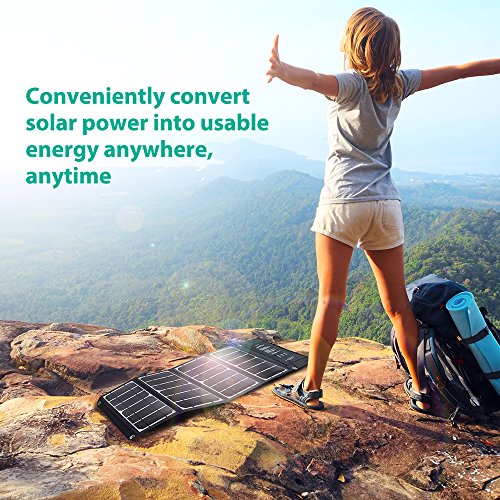 This model’s solar charging capacity, while okay, is far from the best. In fact, you may even say that it can grate on your nerves. The company has made it no secret that it would take up to 85 hours to fully charge this unit by sunlight.

iSmart technology is something to behold as it makes things incredibly convenient and efficient for the regular camper. This brand of technology is embedded into the device through its triple USB ports, providing optimal charging results for every single one of your gadgets. 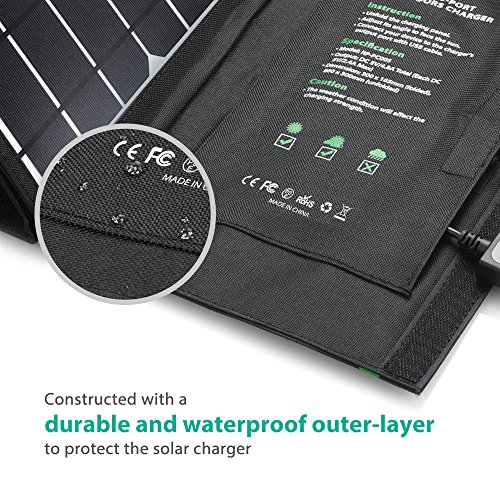 Current is evenly distributed depending on the recharging needs of your phones or tablets, so there is little to no chance of over-charging, overcurrent, or overvoltage.

How to Get the Most of the RAVPower Solar Charger

Several RAVPower reviews would say that this solar charger works pretty much the same as any solar power bank on the market. You either lay it out on the sunlight to absorb energy or use the traditional method of charging wherein you plug the cord attached to the unit into an electrical power source. The latter should be your main way of loading up this solar charger’s battery.

Always use your device safely by not placing it on hot sand, rock, concrete, and other surfaces that have high heat conduction. This causes the panel to overheat and damage the output wattage that can be converted by the device. 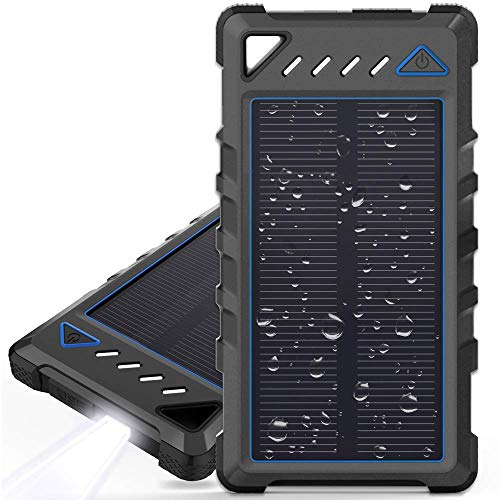 The BEARTWO Portable Solar Charger is a worthy alternative for the RAVPower Solar Charger, particularly if the latter’s size and bulkiness is an issue. While it may pack less of a punch in the power department, it’s still a great power back-up for the following reasons:

This product is one of the lightest on the market. It will weigh next to nothing on your backpack, which is always good because, as an outdoor enthusiast, you’ll want to pack light and have fewer things weighing you down.

We’re talking about a built-in LED flashlight that comes in three modes to help you effectively navigate the wilderness at night.

The RAVPower Solar Charger is definitely one of the best solar power banks on the market today. Its high-capacity battery, triple power port, iSmart technology, and high durability are some of the main reasons why it stands out.

While only half the size of similar chargers, its bulk still remains an issue to many. Of course, if you don’t mind the size or the 85-hour solar charging time, you’ll definitely be amazed at the level of power this power bank can offer!